Figure 2. Melt convection and temperature distribution in the crystal and crucible. Four large vortices are observed in the melt as the combined effect of buoyancy and Marangoni surface tension

Directional Solidification (Casting) of silicon in squared large-scale crucibles is a cost effective technique to grow multi-crystalline Si ingots, which are used to make wafers for solar cells. Crystallization of silicon is initiated on the bottom of the crucible and is maintained in vertical direction by decreasing the heater powers and/or moving of insulation or crucible.

Figures 1-2 shows computer modeling of crystallization history: the temperature distributions in all elements of the crystallization system [1], the melt and gas flows simulated by CGSim software.

It is quite important to keep crystallization front geometry close to a flat shape, especially during the beginning of crystallization. A concave melt/crystal interface results in decreasing grain size and deteriorating wafer quality. CGSim can predict geometry of the melt/crystal interface very well. Fig. 3 demonstrates a comparison to experimental data published in the paper [2]: the interface is flat in the center of the crystal with larger grain size and concave in the crystal periphery with a smaller grain size. 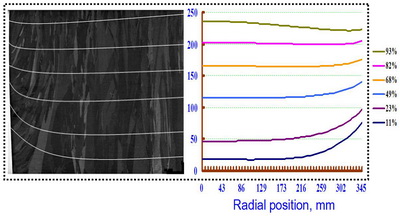 Oxygen, nitrogen, carbon transport and segregation during crystallization dynamics are very important to control for avoiding SiC, Si3N4, and Si2N2O particles formation in the melt and their incorporation into the crystal. Formation of particles along the melt/crystal interface dramatically decreases grain size in the ingot and deteriorates wafer quality. CGSim is a robust tool to simulate species transport including chemical reactions in the melt and gas. 2D or fully 3D unsteady approximations can be used for modeling of convection, diffusion, and segregation of species (see Fig.4). As an example, SiO transport in the gas is coupled to oxygen transport in the melt flow via relations of mass fluxes and equilibrium concentrations along the melt/crystal interface, considering deposition reactions on reactor walls [3].

An example of carbon segregation in a Si crystal is presented in Fig.5. In this case, there is 3D unsteady computation considering heat transfer, melt flow, and carbon mass transfer accounting for segregation along moving melt/crystal interface. By melt flow engineering, carbon concentration in the melt can be managed to be lower than the equilibrium solubility level to avoid SiC particles in the crystal.

The model of carbon segregation illustrated in Fig.5 was successfully verified and used for technology optimization in Ref. [4]. As shown in Fig.6, the authors of [4] reports 10% decrease of carbon concentration in the crystal by using CGSim modeling results, which was obtained by modifications changing the melt flow and crystallization front profile. 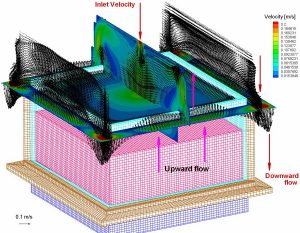 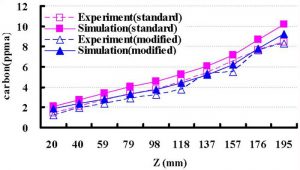 Figure 6. Comparison of experimental and computed vertical carbon concentration profiles in the crystal grown with standard and optimized conditions.